Today in class, we began our discussion of Natasha Tretheway’s Native Guard with “Photograph: Ice Storm, 1971” and “Myth.” I was disappointed at how little time we had to discuss “Myth,” and thought I’d see if we could continue our discussion here. Right before class ended, I commented on two different ways to interpret the poem, especially the way Tretheway mirrors the text in the second half. We didn’t have a chance to discuss the two readings in class, so let’s do it here!

In the first reading, the use of mirroring can give the reader a sense of despair. The poem begins with the statement “I was asleep while you were dying,” and it ends with the same statement. No matter what else in between the two lines, whatever else Tretheway says in the poem, she ends up exactly where she started, doomed to repeat the cycle of guilt, grief, loss, and re-loss. Another aspect of the poem that supports this reading is the phrase “again and again,” as if Tretheway is recognizing the re-loss of her mother is something that she’ll never escape.

Can we see the mirror aspect as hopeful? I mentioned this at the end of class, and I want to hear what you all think. The grief that we go through when we lose a loved one is incredibly difficult, and varies from person to person. However, we tend to believe we’ll  feel a sense of closure when we “get through” the grief process. Sometimes, you have to get to a low place and get back again in order to experience a sense of peace. It’s necessary to process what happened in order to get out of the low place. Perhaps Tretheway’s mirror construction and the reversal of her words reflects her desire to process her loss and get back a sense of who she is.

This is certainly a pretty optimistic reading of the poem, and there are other aspects of the poem that could be analyzed, such as its word choice and the way the punctuation changes the meaning in the reversed version. I find that both of these seem to support the more hopeless reading of the poem, and this is in fitting with the other poetry in the volume. Tell me which reading you support and why; I might be totally off the mark with the optimist reading!

I wanted to continue our discussion in class today regarding Charles Dodgson’s apparent fascination with young girls, particularly with Alice Liddell, and whether or not reading his work supports his potentially deviant sexuality. As I said in class, I think it’s important that the first time we read his work, and that of other artists, it is without the filter of biographical details that might cloud our perception of his art. However, I also think that another reading (with full knowledge of the shadiness of his relationship with Alice and other girls) can be valuable. Perhaps the knowledge will reveal things about the book that weren’t picked up the first time; they will certainly provide a richer understanding of the author himself.

I found an interesting parallel when reading the letters and hearing about Dodgson’s biographical details today. Dodgson seems to share some traits with Humbert Humbert, from Vladimir Nabokov’s Lolita. This character, like Dodgson, is a writer, handsome and good with children, but also eccentric. In the novel, Humbert harbors a secret: a wretched lust and love for prepubescent girls. We know that Charles Dodgson was very close with the Liddell girls until 1863, when he stopped visiting them altogether. Ina Liddell said in a letter that she reported that Dodgson became too affectionate toward Alice. Scholars have speculated that he was courting her for marriage, or her older sister Lorina (Ina). Ina, being 14, was old enough to be courted by Victorian standards, but Alice, at age 11, was not. The theory is that the Liddell mother spoke to him about it, and he never returned. Whatever the case, he lost his connection to the girl he used to spend his days with and photograph extensively. Similarly, Humbert lost his childhood love, Annabel, to a sudden death. After this loss, he becomes obsessed with prepubescent girls, particularly with Lolita, the 12-year-old girl he comes to lust/love. Both figures were eccentric authors who spend considerable time with a prepubescent girl, who became their muse for writing a novel.

The similarities that arose between the two figures fascinated me, and seemed to provide evidence to support reading a text with biological details in mind. Any one agree or disagree with the parallel I drew here?

Watch the first video (lyrics only) first, or at least read through the lyrics, to get a feel of the song and it’s message, and then watch the music video and go ahead and feel confused. I did too. A link to the lyrics is here.

Transactional reader-response, according to Tyson, focuses on how a reader and a text interact, and the significance or meaning of the text is the poem, which is found in the transaction that occurs between the two. In order for a meaningful transaction to occur, the text must be read in aesthetic mode, with attention to emotional subtleties, and not focused solely on the facts. Affective stylistics centers on the idea that a text is an event that occurs as it is read, and it analyzes the cognitive processes that occur to the reader as they read.

My analysis will incorporate these two perspectives, focusing on the cognitive processes and subsequent emotional transactions that I experienced while watching the music video, and then evaluate what the text accomplished overall by scrutinizing the “poem” I experienced and analyzing my response to that interpretation.

The music video starts off with a shot of a girl walking down a wood path. There is a crow cawing, and the leaves are blowing across the ground. The sky is gray, and there is no music. The natural drama of this scene excited me and made me a little nervous. It reminded me of the eerie, twilit pathway in Jane Eyre, right before she meets Rochester. There’s a feeling of imminent action. The shot is also shown from far away at ground level, which resists my idea of my normal position in my world, subverting my feeling of normalcy, solidity, and self. As the music begins to play, scenes of the girl with shocking blue eyes, carrying a covered case, are interspersed with shots of the band members in a jail, and eventually some scenes of a group of men betting on something. I felt disappointed at the direction the video was taking. The camera repeatedly paused for close-ups on the girl’s eyes; this combined with the theatrical scenes of the men felt a little overboard.  I had interpreted the song to be very meaningful, and (at this point) I wanted to take the video very seriously as well. But it seemed like the music video was taking itself too seriously – predictable and overly dramatic.

Then comes the unexpected.

The rest of the music video is about a puppet monster that brutally fights and kills other puppets in a ring surrounded by angry, betting men. The monster is undefeated, until the girl brings in her teddy bear to fight in the ring. The teddy bear uses its power-punch and laser-vision to destroy the monster and several cronies as well. The girl takes the key from the head honcho and frees the band from jail. Hooray! The head honcho is then presumably killed by the angry horde of puppets.

When I first saw the music video, I was honestly incredibly uncomfortable with it. The transition from what I thought was an artsy, classy, albeit predictably melodramatic music video to a startlingly violent puppet massacre really took me by surprise and put me on edge. My viewing of the rest of the movie was strongly colored by my disapproval of the sudden, uncontrolled direction change. I’ve never been a fan of puppets (the Muppets so frightened me as a child that I hated every one of them, sans lovable Kermit, of course) so I wasn’t exactly thrilled with that plot choice. Scenes such as the beheading of a puppet, a puppet in a noose, and a horde of puppets surrounding the bad guy as he screams in terror to presumably maul him to death, I found disturbing, out of context of the song, and confusing. However, I found myself (a little against my will) smiling at the (darkly) uplifting plot of the music video. Good (fluffy pink teddy bear) triumphs over evil (puppet monster that mutilates other puppets). It was unexpected, and maybe a little refreshing. It felt good to see the plot sort itself out, and I had to admit that it seemed to fit with the lyrics of the song, which reference a revolution and reform- a new age or awakening (“I raise my flags … it’s a revolution I suppose” and “I’m waking up, I feel it in my bones … welcome to the New Age”).

As I looked back to analyze my response, I began to appreciate more what the music video had accomplished. The way the video had made me feel when it subverted all of my norms expectations and spun around in a completely different and unexpectedly positive direction (uncomfortable, confused, disapproving, even a little scared) mirrored the subject of the song itself: a revolution. The video had shaken me up, as revolution usually does, but had given an uplifting, positive message of new life, reform, transformation, and renewal in the end. 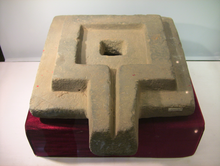 In class today, we were talking about the origins of the phrase “yonic symbol.” Dr. Scanlon mentioned the roots of the word were to be found in  Hinduism. I did some research and discovered that “yoni” isn’t a goddess; It is literally the Hindi word for “vagina.” It’s connotations are a little more complex, however, and in line with the type of symbolism we look for when we label objects in books as yonic symbols. It can mean “source,” “spring,” “home,” “lair,” “nest,” “fountain,” “origin,” “birth place,” or “place of rest.” The yoni is the origin of life, and is therefore fundamentally connected to birth and rebirth, as well as the creative forces of Hinduism, Shakti and Devi. It is  linked to fertility of agriculture, and is used commonly to describe yoga poses, art, and architecture, as well. I thought these correlations in the language and religion were interesting and rich enough to be shared, as they provide another layer of meaning to yonic symbols we might find in the texts we read.