“Feminism is the radical notion that women are human beings.” -Cheris Kramarae

Today in class we discussed feminist criticism in regards to literature. After, hopefully, clearing up any misconceptions that the class may have had about feminism (we’re not all bra burning man haters, I promise) Dr. Scanlon began to talk about different feminist theories. We discussed the idea of essentialist vs. constructionist views in regards to gender; which of the gender qualities that we take for granted (such as the idea that women are reserved while men are outspoken) are inherent and which are societal constructs.

We discussed the idea of materialist feminism, or the ways economic and physical environments may disadvantage women. With materialist feminism it is beneficial to take a Marxist view and see women as an oppressed class. For example, Women are often expected to complete all the “housework” (which is itself a dismissive term) and care for the children; taxing duties that offer no pay and often no respect.

We also spent a great deal of time discussing that old feminist favorite, the patriarchy.  The patriarchy is the idea that our society has institutionalized sexism to such a degree that women are systematically oppressed in all aspects of society.

Something that was brought up by Dr. Scanlon that I found particularly interesting was the notion of the patriarchy affecting the literary canon. The example of Nathaniel Hawthorne was given; that he is a canonized author while many women writers that existed at that time, even those that were outselling Hawthorne, were lost to obscurity. This type of sexism is so pervasive that it even affects women writers who are canonized. For example, Dr. Scanlon talked of how Emily Dickinson was marginalized by critics who refused to acknowledge the grandiose themes of her poetry, instead insisting that she only talked of “little flowers”

This discussion was fascinating to me because this type systematic oppression and reduction  is still an issue for contemporary female authors. Take JK Rowling, the author of the most popular book series in the last decade, who was forced by her publishers to go by her initials because they told her that boys would not read a book written by someone named Joanne. [youtube]http://www.youtube.com/watch?v=jcKZxv-hNoU[/youtube]

Can anyone else think of any ways in which the patriarchy, or sexism in general, affects our understanding of literature? Why do you think its important (or not important) to reexamine female writers who me have been disregarded in their time?

Mulan is the classic Disney story of a young Chinese girl who disguises herself as a boy to take her father’s place in the army. This movie seemed to me to be a clear choice for LGBT analysis, as it is filled with what Tyson refers to as “gay signs,”  which are coded signs of  created either heterosexist culture or by the gay subculture itself. Additionally, at its heart, Mulan is the story of a search for identity, a theme prevalent in many LGBT works.

The initial evidence for this theory may be seen in the beginning of the movie. Here, Mulan is depicted as being visibly uncomfortable with traditionally feminine activities and practices. She bemoans the fact that her reflection does not depict how she feels inside. Therefore, while she ostensibly joins the army out of a sense of love and loyalty to her family, it is not a stretch of the imagination to conclude that she is desperate for any excuse to be perceived as male because of a repressed longing that she has buried from her conscious mind.

The analogy for LGBT struggles, particularly that of transgendered youth, continues when Mulan’s family becomes aware of her cross dressing. Her father implies that she will be killed if she is “discovered” (a fearful reality for many LGBT youths and their families) and her ancestors are outraged by her decision, referring to her as a “troublemaker” and implicitly stating that “Traditional values will disintegrate” as a result of her actions. These reactions by Mulan’s family are an example “gay code,” whether or not this was the intent of the screenwriter.

Another common LGBT theme evident in Mulan is that of homosocial bonding, which can be found at the military camp where Mulan (now known as Ping) goes for her training. At this camp, hundreds of men are depicted living, working, training, and relying on one another. These men share a bond that could not be replicated with any woman.

There are several instances in this movie where this homosocial bonding seems to transgress into homoeroticism. Take for example, the scene where the soldiers are bathing in the lake. While this scene may seem harmless, when viewed through the lens of LGBT analysis, is is heavily implied that there is a sexual relationship expected among the solder. For example, when playfully challenged by another soldier, the character Ling suggestively states “Oh, I think Ping and I can take you.” Perhaps the greatest example of homoeroticism in Mulan is the relationship between Mulan (Ping) and General Li Shang. General Shang’s initial mistreatment of Mulan/Ping may stem from some form of internalized homophobia; he finds himself attracted to someone he believes to by male, and conditioned by years of exposure to heteronormative culture, is disgusted by these feelings and projects his hatred of himself onto Mulan/Ping.

As Li Shang grows closer to Mulan/Ping, the audience can see his hateful feelings begin to dissipate, as he comes to identify with his homosexuality. This explains why he becomes so angry when Mulan’s true identity is revealed; he feels betrayed. However, even though Mulan is physically female, it may be argued that she and Li Shang are still a homosexual couple, since Mulan identifies as male and Li Shang fell for Mulan while she was perceived as male.

In addition to homosocial bonding and homoeroticism, there are also several instances of camp and drag being employed throughout the movie. Aside from the previously discussed transgenderism of Mulan, the masculinity of the match maker (typically a female position) is played for laughs, and at the end of the movie, three men in drag save the day. As stated by Tyson, drag is the practice of men dressing in women’s clothing, often to make a political statement about gender roles or to defy the gender binary. By having three soldiers in drag, there is a message of the power in embracing ones sexuality, however unconventional. 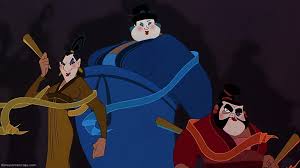 Overall, Mulan, while a seemingly innocuous movie, is littered with LGBT subtext that, when analyzed through the proper lens, reveals the story to be an analogy for the rights and struggles of LGBT people everywhere.